The tax on insurance policies will increase by 2% from 6% to 8% from 1st January 2021. Whilst this was announced at the end of October 2020, with January fast approaching it is worth remembering that any increase in your premium price in 2021 is not all down to the insurance company.

The Spanish government hopes to bring in an extra 455millon euros through this tax in the first year.

This is not the only additional cost to the motorist in Spain. From January someone buying a new car will also see many new car prices rise with the introduction of the World-wide harmonized light-duty test procedure (WLTP).

The WLTP is a new European standard used to test fuel consumption, CO2 emissions, pollutant emissions and energy consumption (electric vehicles). It replaces the NEDC which was introduced back in the 1980s. The thinking behind the new measures is that it gives a more realistic measure as it has been based on real-driving data gathered from around the world.

This means that the emissions and CO2 levels shown more accurately reflect what your car is really producing. Some of the tests involve more realistic driving behaviour, a greater range of driving situations and longer distances. These more accurate tests have a drawback for buyers in Spain, however.

If the vehicle you want to buy was previously in the 0 to 120 g/km tax bracket but has now moved in the 121 to 159 bracket under the new more accurate test your car will be more expensive. For example, a 20,000 euro car will cost almost 1,000 euros more.

The Kia Niro PHEV leads the sales charts of plug-in hybrids so far in 2020, with more than 1,000 units sold in this country.

Since its launch, the Niro has always remained at the top of the lists of car sales, with more than 5,600 units sold so far this year.

It is another milestone in the success story of a model that approaches 25,000 units sold in Spain and has managed to bring together all of the three most effective public electrification technologies: hybrid, plug-in and electric hybrid. But the success of the Niro goes far beyond our borders. In Europe, sales are heading towards the 150,000 units since its launch. 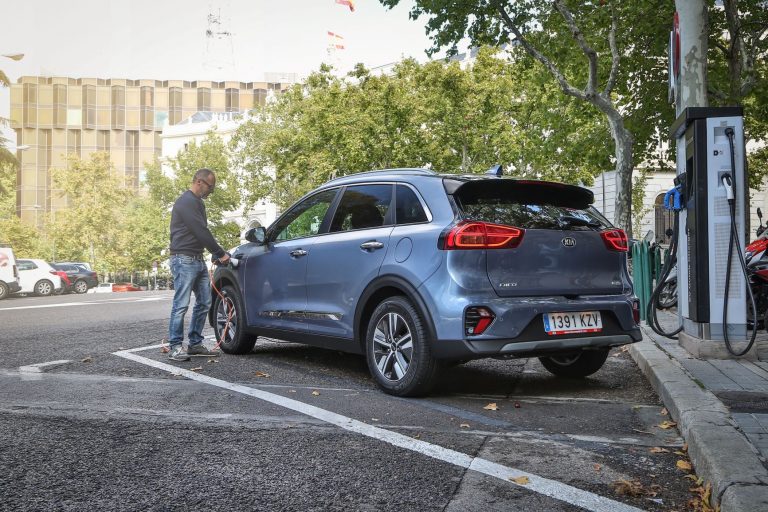 What are the key factors that have made the Niro a bestseller?

The Kia Niro is the first crossover in the world to offer hybrid versions, plug-in and electric hybrid. This comprehensive offering, which no other SUV or crossover has ever managed to match, allows users to choose the variant that best suits their needs, without compromising anything. One of the keys to this achievement is the design of a specific platform for environmentally friendly vehicles.

The Kia Niro is the first crossover in the world to offer hybrid versions, plug-in and electric hybrid. This comprehensive offering, which no other SUV or crossover has ever managed to match, allows users to choose the variant that best suits their needs, without compromising anything. One of the keys to this achievement is the design of a specific platform for environmentally friendly vehicles.

The Niro has a look and attributes that have made the crossover into the big winners in the market. On the one hand, it offers a high driving position, interior space and a boot capable. And secondly, precise, comfortable and safe driving on the road and in town.

Kia hit the mark by creating the world’s first electrified compact crossover. The model has dimensions that have become the perfect middle ground on the market.

Its length, width and height allow it to offer ample interior space, and a capable trunk. At the same time, it maintains a contained size for driving and parking in the city, and to offer agile reactions on the road.

The Niro responds to the demands of users with the most advanced connectivity system: UVO Connect. This system is composed of a large touch screen, which has a multiple connection via Bluetooth; the Kia Live system, which has a SIM card to collect and update information in real time; and the Kia UVO app, compatible with Android and Apple smartphones.

Thanks to this, the navigator, for example, takes advantage of real-time traffic data to draw the fastest routes. Another interesting help is the price, location and the availability of possible parking spaces, on the street or in car parks. Weather forecasts or fuel prices can also be received in the car in real time. In the electric and plug-in hybrid versions, the system also provides information on the status, availability and compatibility of the charging points.

The UVO application allows us to transfer content from our smartphone to the car, receive information from the car and perform remote operations to activate functions and devices of the vehicle. In the electric and plug-in hybrid versions of the Niro, it also allows you to check the remaining battery percentage from the phone, calculate the time it would take to charge with different types of chargers, set the charging time and program the start time.

The Niro range enjoys the benefits of ECO (hybrid version) and 0 Emissions (Niro plug-in hybrid and e-Niro). Hybrids with an ECO label can circulate even when there is high pollution and through restricted areas such as Madrid Central. In some cities they have discounts on paying for parking in regulated parking areas. They also benefit from a discount on some tolls (especially in Catalonia).

The 0 emissions label brings even more benefits. In addition to what was mentioned about the ECOs, the O emissions also enjoy a road tax discount, which is usually 75%; They can always access the BUS-HOV lanes, enjoy a greater discount on tolls and can park for free in regulated parking areas in many cities.

The Niro incorporates the latest technologies, but it is a more than a proven product, with nearly 400,000 units circulating around the world with a high degree of satisfaction from their owners. In addition, Kia leads the most prestigious reliability studies year after year and offers a 7-year warranty.

The Kia Niro HEV is available from 20,100 euros; the PHEV, from 24,500 euros and the e-Niro, from 37,263 euros. They are very competitive rates taking into account the quality, technology and standard equipment of this model.

Electrified cars do not have to be boring to drive and the Niro is a good example of this in its three versions. All three have a low centre of gravity, due to the arrangement of the batteries, which conveys a lot of stability when cornering. And they offer a great feeling of acceleration due to the contribution of the electric motor and the operation of the sequential gearbox (in hybrid versions).

This is another example of the advanced equipment of this model. The Kia Niro comes with (on the HEV, from the Drive trim; and on the PHEV and e-Niro as standard from the Concept trim) Lane Following Assist LFA. This Level 2 autonomous driving technology controls acceleration, braking and steering based on the vehicle ahead. The LFA uses a camera and radar sensors to maintain a safe distance from the vehicle in front, while detecting the lines of the road so that the vehicle travels in the center of its lane.