Driving licence from outside EU

If you are from outside the EU and you have a qualifying driving licence then you must exchange it for a Spanish one within six months of arriving in Spain.

If there is an agreement between the country where your driving licence was issued and Spain then the process is relatively straight forward. It will mean you exchange your old licence for a Spanish driving licence. This process is done either by using the services of a Gestoria or by organising it yourself through the nearest regional Road Traffic Office.

If your driving licence is issued from a country where there is no agreement with Spain then you will not be able to exchange your licence. You will have to sit the Spanish driving test.

If you come from Japan, South Korea, Andorra, Switzerland or Monaco then the arrangements for you can be found here. Here is a summary in English.

If your EU driving licence does not have an expiry date or perhaps it runs for longer than two years after you begin your residency in Spain, you still have to change it to a Spanish licence.

You cannot just go to your nearest Regional Road Traffic office. You must make a prior appointment. 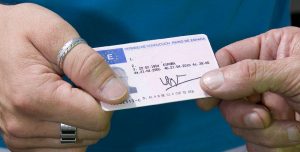